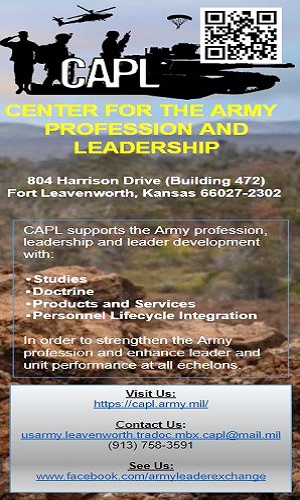 On 1 June 1983, the U.S. Army Center for Leadership and Ethics was established as the proponent for Army-wide leadership and ethics doctrine, training, and integration under the Department of Command, Command and General Staff College, CAC, at Fort Leavenworth, KS. On 3 June 1984, the center was officially renamed the Center for Army Leadership, achieved departmental status in the CGSC, and remained the Army proponent for leadership and ethics. The mission included the development, implementation, and revision of leadership and ethics core curricula and training, field consultation, and staff actions to inform decisions for the U.S. Army Training and Doctrine Command. In June 2013, CAL transitioned from the Combined Arms Center – Leader Development and Education to the Mission Command Center of Excellence.

The Army Center of Excellence for the Professional Military Ethic (ACPME) was established in May 2008 at West Point, NY. ACPME was re-designed as the Center for the Army Profession and Ethic (CAPE) and realigned under the Combined Arms Center (CAC) in August 2010. CAPE’s mission was to address the unique challenges of shaping impressions of the Army Profession and Army Ethic in the aftermath of prolonged conflict in Afghanistan and Iraq.

CAPL assumes the missions of CAL—to develop and provide Army leadership and leader development doctrine and products to the Army—and CAPE—to strengthen the Army’s profession and inspire Army professionals to fulfill their oath of service. CAPL synchronizes personnel life cycle recommendations for the Combined Arms Center to shape the future force. CAPL remains an element of the Mission Command Center of Excellence and CAC.